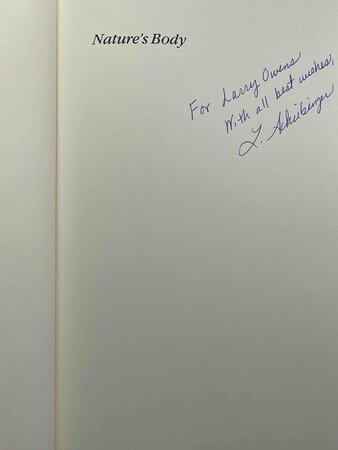 NATURE'S BODY: Gender in the Making of Modern Science.

Boston: Beacon Press, (1993) dj. SIGNED hardcover first edition - A book which "concentrates on 17th- and 18th-century European developments in taxonomy and physical anthropology to show how the European male became the prototype of the human race; how women were reduced to a subset noted only for sexual differences; and how people of color were placed at inferior levels of the great chain of being, on a par with apes. By celebrating sexuality in plants, Erasmus, Darwin, and Linneaus did much to set the stage for thinking of females in terms of sexuality alone - leading Linneaus to choose the term 'mammals' to distinguish the order of warmblooded, hairy animals - -but also to underscore women's role as nurturing caretakers. More shocking was the scholars' concern with female genitalia and sexual characteristics." (Kirkus) Winner of the 1994 Society for Social Studies of Science Ludwik Fleck Prize which noted that her "incisive book draws timely attention to the critical roles of language, metaphor, and ideology in the development of science." INSCRIBED by the author on the half title page to the late Oklahoma collector Larry Owens. Illustrated with reproductions of vintage drawings. Extensive notes, bibliography, index. viii, 289 pp. ISBN: 0-807089001.

Condition: Fine in fine dust jacket. Uncommon in the first edition, and especially so signed,