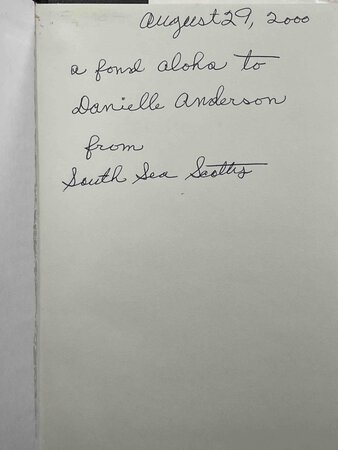 New York: Vantage Press, (1999.) dj. SIGNED hardcover first edition - In 1939, Scotty Guletz took leave of his job as a newspaper reporter to live on a tiny island group in the Pacific South Seas and record and photograph life there. He lived as a native, made friends and was treated as one of the tribe, albeit one of the elite. On these islands rarely visited by outsiders, Guletz kept a detailed, chronological and insightful recording of the natives' daily lifestyle, including their religious and cultural beliefs and practices, their languages and their activities. INSCRIBED by author on the front endpaper "with a fond aloha" (signed as 'South Seas Scotty') and dated in 2000 With photographs, glossary. 179 pgs. ISBN: 0-533-128544.

Condition: Near fine in near fine dust jacket (some discoloration from binder's glue in gutters, minor edgewear to dj) - overall a tight and clean copy of a book which has become harder to find.