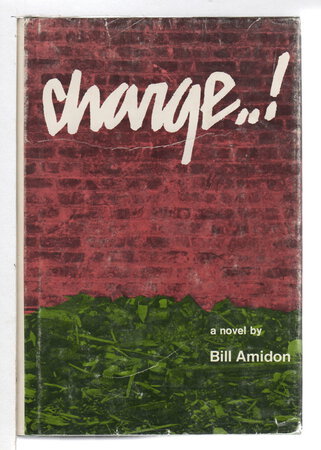 Indianapolis: Bobbs-Merrill, (1971) dj. Hardcover first edition - The dust jacket flap describes this - Amidon's first and only novel - as the story of anti-hero Jesse Faulcom, "a long haired, dope-smoking, one-eyed lustful hippie living in New York's lower East Side in the 1960s." In his 2009 comments about this era for the NY Times, Ishmael Reed commented "The late Bill Amidon's novel Charge..! is the best novel written about that period. He was one of the writers who hung out at Stanleys, a bar where black and white writers and artists gathered in the 1960s, presided over by the owner, our uncle, benefactor and patron named Stanley Tolkin." 469 pp.