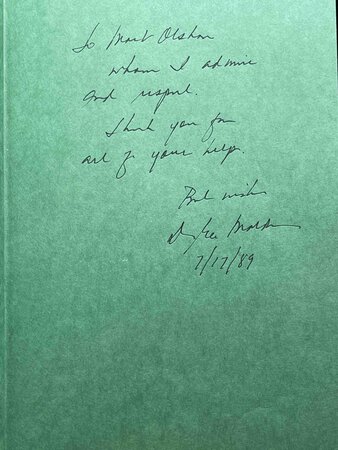 New York: William H. Morrow, (1989) dj. SIGNED hardcover first edition - A controversial expose which traces the influence of organized crime on the National Football League and such players as O. J. Simpson. Upon publication, it garnered a very negative review in the New York times labeling it as "sloppy journalism" with the comment that not even the 64 pages of footnotes could be trusted, a review which became the subject of a extensive legal battle between the author and The New York Times, eventually ending in victory for the NY Times 4 years later when the Supreme Court refused to hear the case. While Moldea claimed that the review destroyed his writing career, it did recover and he went on to publish many other books; meanwhile the reviewer in question no longer wrote reviews for the NY Times. An association copy INSCRIBED on the front endpaper "To Mort Olshan, whom I admire and respect. Thank you for all your help" and dated in the year of publication. Olshan is described in the book as "perhaps the most renowned football handicapper in the United States" and he is included in the acknowledgments (his name is underlined on p 8.) Glossayr, notes, index. 512 pp. ISBN: 0-68808303X.