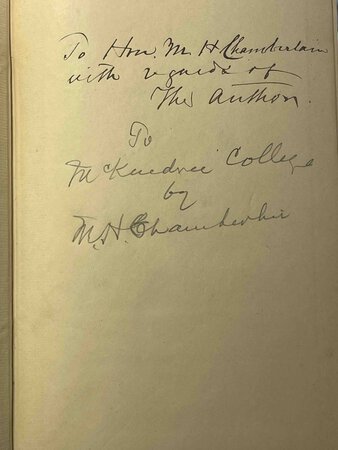 LETTERS FROM CALIFORNIA: Its Mountains, Valleys, Plains, Lakes, Rivers, Climate and Productions. Also Its Railroads, Cities, Towns and People as Seen In 1876.

Springfield, IL: Illinois State Journal Co., 1877. SIGNED hardcover first edition - Contains 21 long letters written between October 1875 and March 1876, when David Phillips travelled to California in the unfortunately unsuccessful hope that a change of climate would restore the health of his son who was suffering from consumption. The detailed letters he wrote from there covered almost every aspect of California life at the , including the libraries of San Francisco, architecture, mining as well as the mountains and agricultural areas. A presentation copy, SIGNED "by the author" to "Hon. M. H. Chamberlain", who, in turn, presented it to McKendree College with his signed presentation right below that of the author. Bound in brick colored cloth with black decorations and gilt lettering on the front cover. 171 pp.

Condition: Ex-college library with several stamps, signs of the removal of a pocket on the rear pastedown, but overall good condition - both sturdy and attractive despite its flaws.