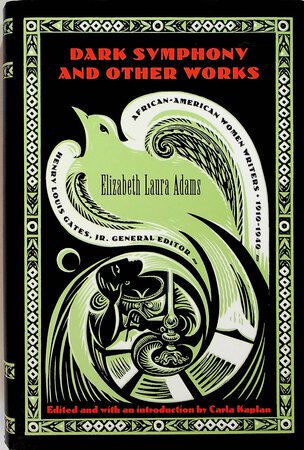 DARK SYMPHONY and Other Works.

New York: G. K. Hall, (1997) dj. Hardcover first edition - A title in the African-American Women Writers 1910-1940 series, under the general editorship of Henry Louis Gates, Jr. and Jennifer Burton. Originally published in 1942, this is the autobiography of a young African American woman who was born in Santa Barbara, California to a family in "comfortable circumstances" although she grew up during the Depression, and who converted to Catholicism after her graduation from high school. This book attempts to reconcile both her sense of herself as a "new Negro" and her spiritual life as a Catholic who eventually became a Franciscan Tertiary. She recounts not only her spiritual awakening, but also the necessity to overcome racial prejudice even within the Church itself. Edited and with a long introduction by Celia Kaplan, in which she discusses both Adams' financial straits and the underlying rebellion and discontent in what is basically a conservative work. Also includes some of Adams' other writings - both on the Catholic religion and on racial issues like the long prose-poem "The Last Supper" which is about a Black man being wrongly executed. lviii, 282 pp. ISBN: 0-783814291.