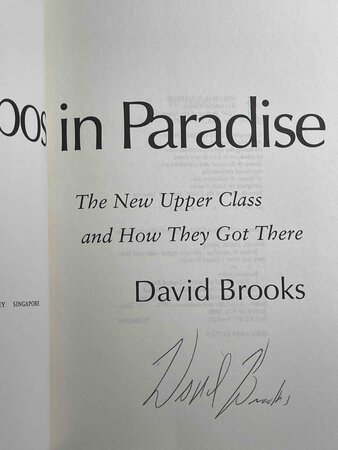 BOBOS IN PARADISE: The New Upper Class and How They Got There.

New York: Simon & Schuster, (2000). SIGNED hardcover first edition - The first book by this New York Times columnist - One reviewer called it "a brilliant, breezy, and often hilarious study of the 'cultural consequences of the information age.' Large and influential (especially in terms of their buying power), the Bobos have reformed society through culture rather than politics, and Brooks clearly outlines this passing of the high-class torch by analyzing nearly all aspects of life: consumption habits, business and lifestyle choices, entertainment, spirituality, politics, and education. Employing a method he calls 'comic sociology,' Brooks relies on keen observations, wit, and intelligence rather than statistics and hard theory to make his points. And by copping to his own Bobo status, he comes across as revealing rather than spiteful in his dead-on humor." SIGNED on the title page. Index. 284 pp. ISBN: 0-684853779.