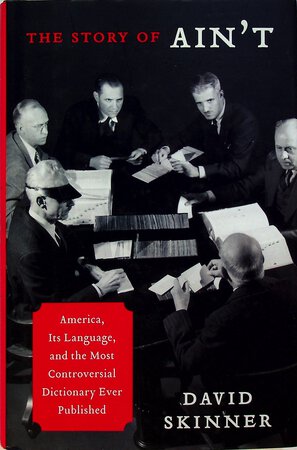 THE STORY OF AIN'T: America, Its Language, and the Most Controversial Dictionary Ever Published.

New York: Harper Collins, (2012) dj. Hardcover first edition - A book which "describes a great societal metamorphosis, tracing the fallout of the world wars, the rise of an educated middle class, and the emergence of America as the undisputed leader of the free world, and illuminating how those forces shaped our language. Created by the most respected American publisher of dictionaries and supervised by the editor Philip Gove, Webster's Third broke with tradition, adding thousands of new words and eliminating 'artificial notions of correctness,' basing proper usage on how language was actually spoken. The dictionary's revolutionary style sparked what David Foster Wallace called 'the Fort Sumter of the Usage Wars'." Notes, index. xiv, 349 pp. ISBN: 978-0062027467.

Condition: Very near fine in a like dustjacket (some toning to the pages)