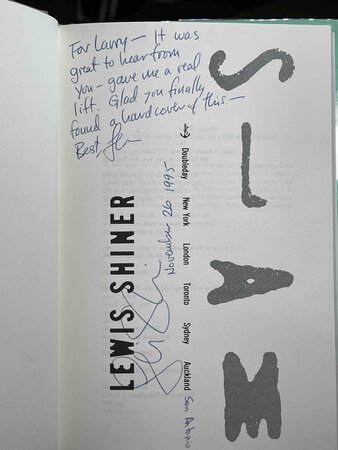 New York: Doubleday, (1990) dj. SIGNED hardcover first edition - The third novel by this award-winning writer. Dave, a 39-year-old ex-hippie has just released from prison, where he'd been sent for not satisfying his IRS obligations and now on parole, is working as caretaker of a large beachhouse near Galveston, Texas - which means he must follow to the letter the late owner's eccentric will and keep her home exactly the same as it was when she died, including making sure that none of her cats escape. Publishers Weekly called this "An unqualified delight." and commented that "No other writer could have made a cogent world out of these disparate entities and a wild group of supporting players which includes cocaine dealers, a teenage runaway, a Christ-mongering probation officer and a lawyer who hates lawyers." INSCRIBED on the title page to the noted Oklahoma collector, Larry Owens. 233 pp. ISBN: 0-385266839.