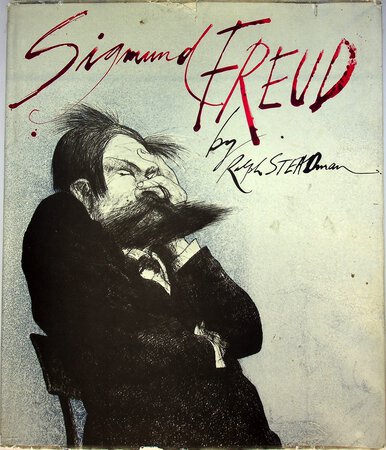 New York & London: Paddington Press, (1979) dj. Hardcover first edition - A typically almost incredible work by Steadman, the culmination of more than 3 years research and work - - or to put it another way - "One genius takes on another. . . a wildly humorous exercise in bending, stretching and speculating on the activities of the so-called Father of Psychoanalysis. Ralph Steadman wields his shrewd wit and fierce pen to highlight the movements of Freud's life and career, from early childhood to the moment of death. Through a masterful interplay of text and illustration, each scene is transformed into a 'joking situation,' which the artist hilariously examines according to the techniques discussed by Freud himself in his 1905 book, Jokes and Their Relation to the Unconscious." Large format, illustrated with more than 50 major drawings and 25 vignettes. Index. 118 pp. ISBN: 0-709207336.

Condition: Near fine in a very good minus dust jacket. (several short tears and other edgewear to the dj, original price of $17.95 on flap)