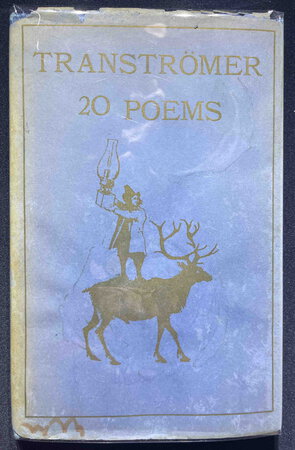 Madison, Minnesota: Seventies Press, 1970. dj. Hardcover first edition - The first book of poems by this 2011 Nobel laureate to be published in English translation - a bilingual edition with the orginal Swedish on the right, English on the left - translated and with an introduction by Robert Bly. 59 pp. plus colophon. One of 1000 copies printed in hardcover (there were also 1000 paperback copies) by Morgan Press.

Condition: Fair condition only in dark blue boards, lettered in gilt on the spine (the glued text block has become detached from the boards, previous owner's name stamped on the edge of the textblock) Overall chipping and edgewear and toning to the rather fragile dust jacket.