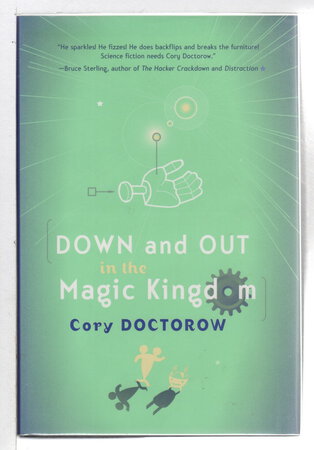 DOWN AND OUT IN THE MAGIC KINGDOM.

New York: TOR / Tom Doherty Associates, (2003) dj. Hardcover first edition - A novel described as a combination coming-of-age romantic comedy and a cybernetic tour de force. "Jules is a young man barely a century old. He's lived long enough to see the cure for death and the end of scarcity, to learn ten languages and compose three symphonies...and to realize his boyhood dream of taking up residence in Disney World - the greatest artistic achievement of the long-ago twentieth century. Now in the care of a network of volunteer "ad-hocs" who keep the classic attractions running as they always have, enhanced with only the smallest high-tech touches." But now the ad-hocs are under attack.... 206 pp. ISBN: 0-765304368.