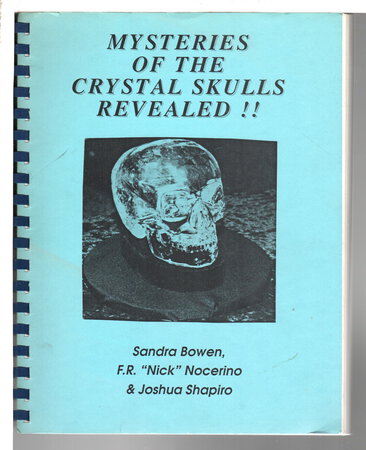 MYSTERIES OF THE CRYSTAL SKULLS REVEALED.

Pinole, CA: J & S Aquarian Networking, (1987). First edition - Uncommon first printing of this comprehensive book on the research which had been done to date on crystal skulls. Joshua Shapiro has been involved with the crystal skulls since 1983, when he saw a human sized amethyst crystal skull in California. Since this time he has visited or worked with a number of crystal skulls and given hundreds of lectures around the world. Sandra Bowen is a gifted sensitive who has worked with a number of crystal skulls, and Nick Nocerino is considered one of the foremost experts on the crystal skulls and is the head of the Crystal Skull Society. In addition this several articles based on channeling by Bowen and others, including excerpts from "The Skull Speaks." Includes a directory of crystal resources and much more. Illustrated with photographs and drawings. 309 pp.