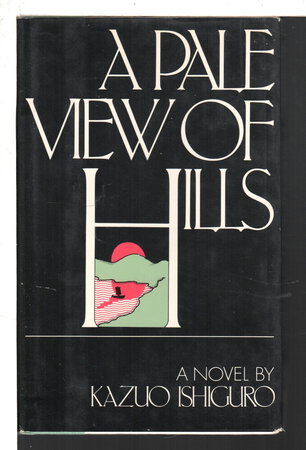 A PALE VIEW OF HILLS.

New York: Putnam, (1992) dj. Hardcover first edition - Ishiguro's first novel, a book which fuses past and present in the story of a Japanese woman living in England, who, after the suicide of her older daughter, shares with her English-born younger daughter memories of life in Nagasaki one summer after the bomb, as new buildings were just beginning to be built on top of the devastation. This book was the winner of the Winifred Holtby Memorial Prize, and Ishiguro went on to win the Booker Prize (four of his novels were short-listed for that prize) and in 2017 he was awarded the Nobel Prize for Literature. 183 pp. Dust jacket by Joel Avirom. ISBN: 0-399127186.

Condition: Near fine in near fine dust jacket (a tight copy which appears unread, but with remainder mark, with ink smudge on top edge of front board, 1 1/4 " tear to dj at fold of rear flap)