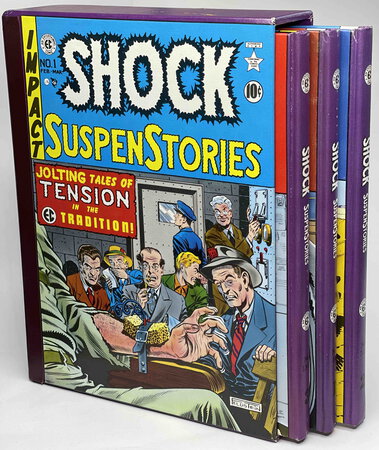 West Plains, MO: Russ Cochran, (1981). Hardcover first edition - When Shock SuspenStories appeared in 1951 it included examples of EC's (Entertaining Comics) crime, horror & science fiction stories. Most issues also included a story which dealt with race relations, rape, and other normally taboo subjects (Gaines referred to them as "preachies.") Among the stories are adaptations of two Ray Bradbury short stories - The Smallest Assassin, The October Game. Many of the stories - and the cover illustrations - were very controversial: although the goal was to provide "intelligent and adult entertainment" the publishers were accused of publishing hate literature and also of obscenity. In black and white, with full color reproductions of the covers of each issue. Illustrated by Johnny Craig, Jack Kamen, Graham Ingels, Jack Davis, Reed Crandall, Al Williamson, Frank Frazetta and others. Includes letters to the editor, other short stories and ads as they appeared in the original issues. Notes and comments by Bill Spicer, John Benson, Bhob Stewart and Bill Mason. Set consists of three large format books (6 issues in each volume) in illustrated boards, in an illustrated slipcase. Published as part of the complete EC Library.

Condition: Fine in a near fine slipcase.