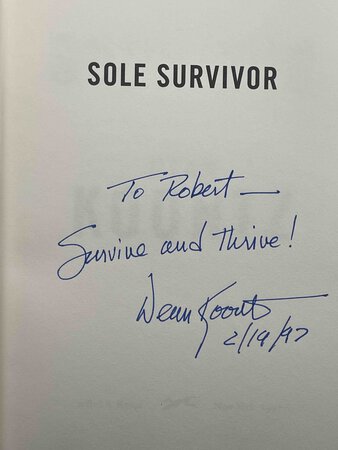 New York: Alfred A. Knopf, 1997. dj. SIGNED hardcover first edition - From the jacket flap: "The story begins with a catastrophic, unexplainable plane crash. Three hundred and thirty dead, no survivors. Among the victims, the wife and two young daughters of Los Angeles Post crime reporter Joe Carpenter. A year later, still gripped by an almost paralyzing grief, .. Joe encounters a woman named Rose. She claims to have survived the crash, and holds out a tantalizing possibility: a secret that will bring Joe peace of mind. But before her can ask any questions, she slips away." INSCRIBED by Koontz on the half title page - "To Robert, Survive and thrive!" and dated in the year of publication. Ticket to signing event laid in. . 321 pp. ISBN: 0-679-425268.