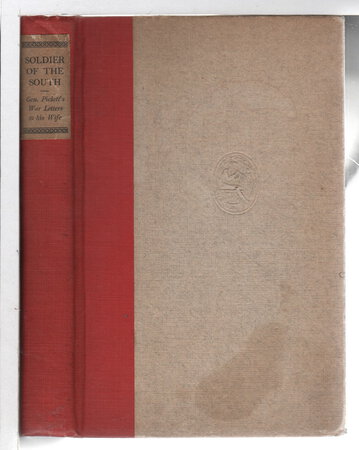 SOLDIER OF THE SOUTH: General Pickett's War Letters to His Wife.

Boston: Houghton Mifflin, 1928. Hardcover first edition - Forty-six letters from General Pickett to La Salle Corbell Pickett, during the period of the 'War' and after, edited and with a foreword by Inman. The first letter describes his trip, under a false name, fromo San Francisco back to his native state of Virginia, and the final a reunion of the survivors of the Battle of Gettysburg, where he led a charge that resulted in over 1500 fatalities. Although he states that he was personally opposed to secession, he felt his first duty was to his native state. While the letters are an interesting look at life on the battlefield, the foreword by Arthur Inman focuses on the glorious "lost cause." Illustrated with a color frontispiece and three internal plates. xvi, 158 pp.

Condition: Very good overall in tan boards with a red cloth spine, paper label on spine (toning to the pages, some staining to the covers, and minor wear to the edges of the label)