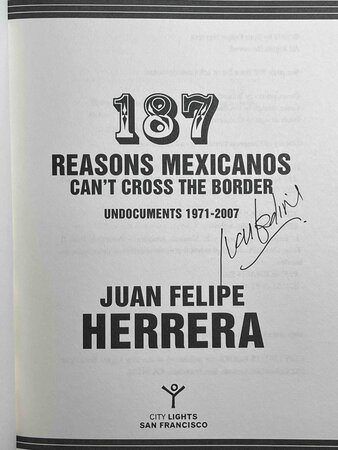 San Francisco: City Lights Books, (2007). SIGNED first edition - "A hybrid collection of texts written and performed on the road, from Mexico City to San Francisco, from Central America to central California, illustrated throughout with photos and artwork. Rants, manifestos, newspaper cutups, street theater, anti-lectures, love poems, and riffs tell the story of what its like to live outlaw and brown in the United States." Herrera who served as both California poet laureate and as US poet laureate from 2015-2017, was the child of migrant farmers and his early days in the fields of California have strongly shaped his work. SIGNED on the title page. 352 pp plus sources and more photographs. No indication of printing on copyright page but original price of 16.95 on rear cover. ISBN: 978-0872864627.