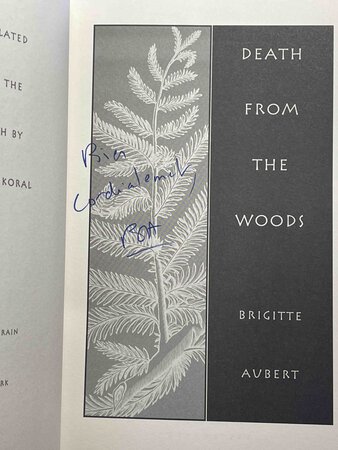 DEATH FROM THE WOODS.

New York: Welcome Rain Publishers, (2000) dj. SIGNED hardcover first edition - A book which won the 1997 Grand Prix de Litterature Policiere, the equivalent of the Edgar Allan Poe Award. "Elise Andrioli has been left blind, mute, and quadriplegic after a terrorist bomb explosion in Northern Ireland that killed her fiance. Back in the small suburb outside Paris where she lives, Elise leads a solitary life except for the contact that she has with her caretakers. However, a series of grisly local murders has shaken the residents. Young boys have been disappearing only to be discovered a day later, dead and horribly mutilated. . . This first-person mystery is not only chilling, it is - incredibly - amusing. . . readers, far from feeling sorry for Elise, will find themselves cheering on this gutsy woman as she uses her remarkable intellect to keep herself out of danger and bring the murderer to justice." (Otoo Penzler) SIGNED on the title page with the words "Bien Cordialement." Translated from the French by David L. Koral. 279 pp. ISBN: 1-566491096.