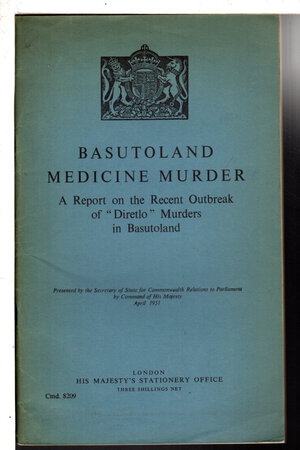 < >
Secretary of State for Commonwealth Relations.

London: His Majesty's Stationery Office, 1951. First edition - Presented by the Secretary of State for Commonwealth Relations to Parliament in April, 1951, this is a report on "(1) the nature and significance of the large numbers of murders which had taken place in 1947 and 1948 in Basutoland, (2) the proximate causes of and underlying reasons for the apparently increased incidence of the crime, and (3) the steps which the Basutoland Administration might take to remedy the position. Includes a look at the role of native medicine men and the use of 'diretlo' in the making of magical medicines with protective value. Appendices, Diagrams (including two fold-out diagrams) and a fold out map. vi, 104 pp.

Condition: Very good in blue stapled wrappers (toning to both the cover and the pages)