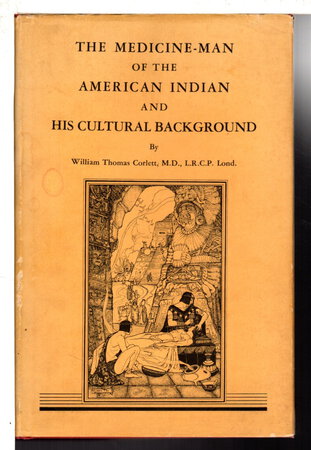 THE MEDICINE MAN OF THE AMERICAN INDIAN AND HIS CULTURAL BACKGROUND.

Springfield, IL: Charles C. Thomas, (1935) dj. Hardcover first edition - A medical and sympathetic anthropological study ( as Corlett notes in his preface, this has as much religion as medicine and more theology than pathology) of the role of medicine men in the different cultures of Native Americans, from the Arctic through the Plains and the Southwest, Central America, and South America to Patagonia. The various chapters are devoted to different geographical areas and also to general topics like childbearing and foods and materia medica. Illustrated with many drawings and photos; bibliograhy, index. vii, 369 pp. The colophon is printed on a separate sheet laid in at the back. Also accompanying this copy is a small typed note which explains the significance of the dust jacket, stating in part "The color is the sacred color of the Inca of Peru and the cut is that of a Medicine Man trephining the skull to let out some supposed cause of the disease" and signed with W.T.C.

Condition: Very near fine in dark red cloth with gilt lettering on the spine in a very good dustjacket with minor wear, some sunning to the spine of the dj. Rather uncommon, especially in this condition and in a dust jacket.