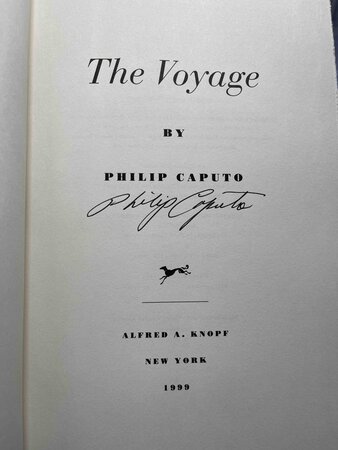 New York: Alfred A. Knopf, 1999. dj. SIGNED hardcover first edition - A complex novel which begins in June 1901, when Bostonian Cyrus Braithwaite banishes his three teenaged sons from their family's Maine seacoast summer home, sending them off alone in a schooner with orders not to return before fall. The trip takes them to South Carolina, the Tortuga Islands off Key West, and through a hurricane and its aftermath in Cuba, which leaves one of them dead. The story is 'reconstructed' in 1998, by descendant Sybil Brathwaite who gradually unveils a long hidden history of frustration and deceit involving Cyrus's wife Elizabeth, the boys' half-brother, and their father's almost insane hunger for revenge. A story of adventure, courage and the effects of long-held secrets. SIGNED on the title page. 416 pp. ISBN: 0-679-450394.