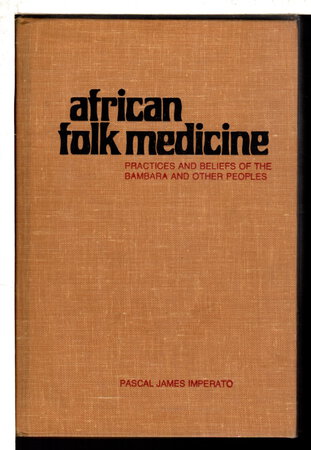 AFRICAN FOLK MEDICINE: Practices and Beliefs of the Bambara and Other Peoples.

Baltimore: York Press, Inc. (1977). Hardcover first edition - An introduction to the traditional medical beliefs and practices of various African peoples - especially the Bambara, one of the largest groups in the West African savannah, and of the Malinke, who live west of the Bambara and whose beliefs are very similar, by a physician who spent several years in Africa, including five among the Mali. In addition to the author's first hand experience, this is based on studies from early in the 20th century to the date of publication. Among the chapters are those on folk medicine among the rural Bambara and the urban Bambara and in Timbuctoo, childhood diseases, mental illness, communicable disease and more. Illustrated with photographs. References at the end of each chapter. Glossary and index. xviii, 251 pp. ISBN: 0-912752084.