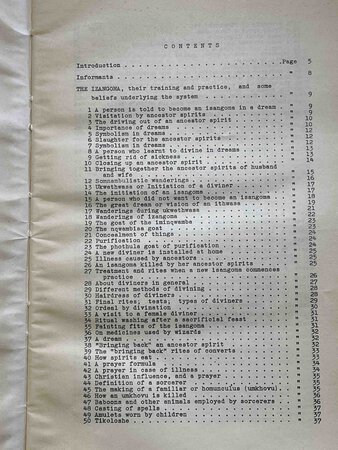 < >
Kohler, M., M.D., edited and translated in collaboration with the author by N. J. van Warmelo

Pretoria, Union of South Africa: By the Government Printer, 1941. First edition - A slim volume considered the most authoritative work on the Zulu Izangoma diviners and healers. The introduction notes that the statements contained in this publication were obtained by Kohler when he was practicing as a mission doctor in Natal. They were mostly dictated to a native amanuensis by patients and informants. The second section is on Iqondo, which is the use of magic spells. Each section in English is followed by a transcription of the original statements, in the regional Zulu dialect. Illustrated with photographs and with many drawings done by a young native man, Gerard Bhengu. 98 pp.