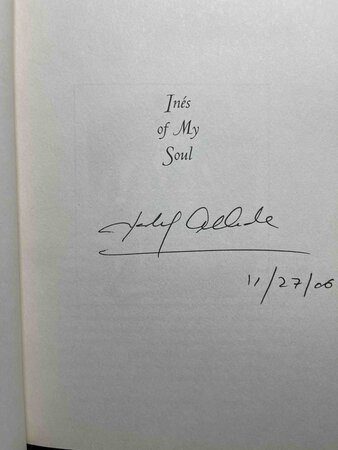 INES OF MY SOUL.

New York: Harper Collins, (2006) dj. SIGNED hardcover first edition - A novel based on 16th century events that led to the founding of Chile. "Born into a poor family in Spain, Ines, a seamstress, finds herself condemned to a life of hard work . . when her shiftless husband disappears to the New World, she uses the opportunity to search for him After her treacherous journey takes her to Peru, she learns that her husband has died in battle. Soon she begins a fiery love affair with a man who will change the course of her life: Pedro de Valdivia, war hero and field marshal to the famed Francisco Pizarro." Together they built the new city of Santiago, and waged a bloody, ruthless war against the indigenous Chileans. SIGNED on the second title page and dated in the year of publication. Illustrations on the title page and preceding each chapter were reproduced from the 1852 Madrid edition of "La Araucana" by Alonso de Ercilla. Translated from the Spanish by Margaret Sayers Peden. Bibliographical note. 321 pp. ISBN: 978-0061161537.