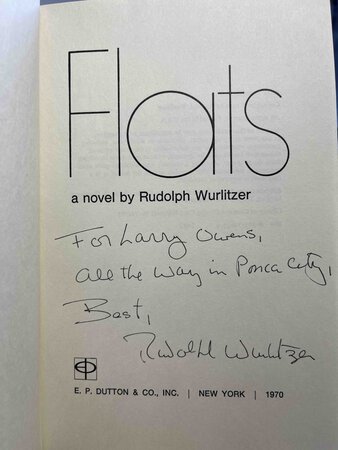 New York: Dutton, 1970. dj. SIGNED hardcover first edition - Second book by this experimental novelist. His first novel was compared to Pynchon's V and Pynchon himself contributed a blurb to this novel noting that this is "hopefully another sign that the novel of bullshit is dead. . . Wurlitzer is very, very good." Wurlitzer also wrote numerous screenplays including the 1971 Monte Hellman film "Two-Lane Blacktop," Peckinpah's "Pat Garrett and Billy the Kid", the cult film "Candy Mountain" with Tom Waits, (which he co-directed) as well as the wrote the libretto for Philip Glass's opera "In the Penal Colony." INSCRIBED and signed on the title page "For Larry Owens, All the way in Ponca City." 159 pp. ISBN: 0-525106456.