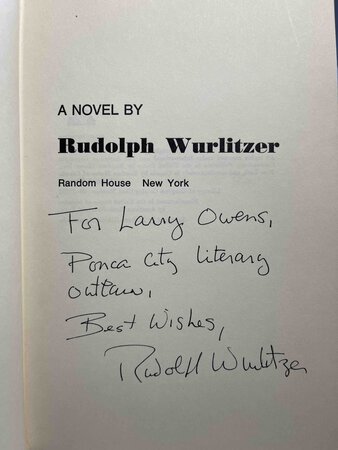 New York: Random House, (1968) dj. SIGNED hardcover first edition - Wurlitzer's very offbeat first novel, about a Sixties road trip that begins in a small town on the California coast to San Francisco, through the Southwest desert to New York through the Panama Canal (and maybe back again.) Comment by Richard Poirer on the dust jacket that this is the "most exciting, talented and original new novel since Pynchon's V." Wurlitzer also wrote numerous screenplays including Peckinpah's "Pat Garrett and Billy the Kid", the cult film "Candy Mountain" with Tom Waits, (which he co-directed) as well as the wrote the libretto for Philip Glass's opera "In the Penal Colony." INSCRIBED and signed on the title page "For Larry Owens, Ponca City Literary Outlaw." 164 pp.

Condition: Near fine in near fine dust jacket (corners slightly bumped, light underlining to one sentence on p 5, slight wear to the dj, especially at the ends of the spine)