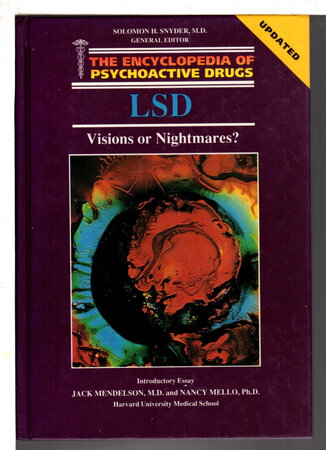 New York: Chelsea House Publishers, (1992). Hardcover - Writen for teenagers, this discusses the origins and effects of LSD and the LSD experience, including flashbacks and toxic effects, and discusses hallucinogens, therapy options, and the effects of drugs on animals. While it is described on the back cover as an objective study, in reality the emphasis is on the dangers posed by LSD (a photograph of the Manson family with the caption that "after using LSD, they embarked on a killing spree" and another photograph of Thelonius Monk with the commentary that a person's creativity can be damaged or destroyed if they take LSD. Illustrated with photographs. Includes several appendices, glossary, suggestions for further reading, index. 103 pp. ISBN: 0-877547521.