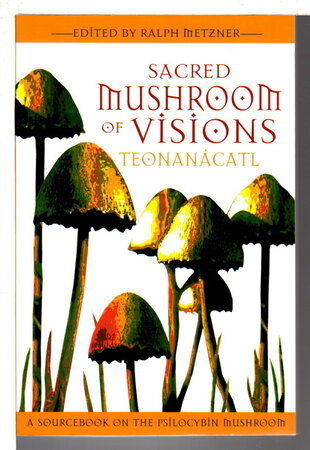 SACRED MUSHROOM OF VISIONS: TEONANCATL: A Sourcebook on the Psilocybin Mushroom.

Rochester, Vermont: Park Street Press, (2006). A book with articles by more than 30 contributors - on the "chemical, biological, cultural, psychological, and experiential dimensions of psilocybin mushrooms." It includes firsthand accounts of the Harvard Psilocybin Project, including the Concord Prison and Good Friday studies - the editor, Ralph Metzner, was part of that project with Timothy Leary and Richard Alpert (later Ram Dass). "Teonancatl was the name given to the visionary mushrooms used in ancient Mesoamerican shamanic ceremonies, mushrooms that contain psilocybin, the psychoactive agent identified by Swiss chemist Albert Hofmann, the discoverer of LSD. The rediscovery of these visionary mushrooms by the Mazatec healer Maria Sabina and mycologist R. Gordon Wasson ignited a worldwide mushroom culture that inspired the consciousness revolution of the 1960s." Illustrated, notes and references at the end of each article. 293 pp. ISBN: 1-594770441.