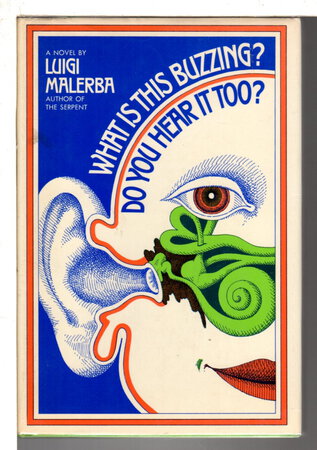 WHAT IS THIS BUZZING? DO YOU HEAR IT TOO?

New York: Farrar, Straus & Giroux, (1969) dj. Hardcover first edition - The second novel to appear in the US by this award-winning Italian author who was one of the most important exponents of the Italian literary movement called Neoavanguardia. He has been described as "an original and linguistically inventive writer with a taste for satire" and Umberto Eco commented that he was "always maliciously ironic, alternating clues to ambiguities." This novel, originally published as "Salto Mortale," was the first winner of Prix Medicis Etranger in 1970; it opens with the murdered body of a man found in a meadow not far from Rome. Translated from the Italian by William Weaver. x, 208 pp. Dust jacket by John Alcorn.

Condition: Fine in lime green cloth in a very near fine dust jacket with just a hint of toning.