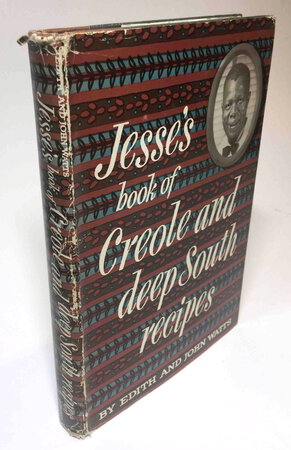 New York: The Viking Press, (1954) dj. Hardcover first edition - The rather uncommon first edition of a book which has become a classic. An example of the casual assumption of privilege - Lewis was the Black cook for the prosperous Ballard family for over 40 years, and so Edith Watts, one of the children and her husband are shown as the authors, but despite this, as Toni Tipton-Martin in The Jemimah Code commented "This book is a compilation of more than 340 of his classic recipes...what is mind-blowing is that these authors observe and record the true finesse possessed by one of history's disregarded cooks, providing details without degradation." The dustjacket includes a brief biography of Lewis on the back cover, his photograph on the front and on the flap it states "Jesse is one of those born cooks ... He is renowned in the Bay St. Louis area of Mississippi, where he has made the Ballard family table famous as a Mecca for visiting gourmets. Of course, his specialties are the Creole dishes of New Orleans ... but the book also contain Jessie's versions of everyday dishes for breakfast, lunch, and supper. The recipes have been set down 'while watching Jesse,' by Edith Ballard Watts and her husband, whose high purpose has been to impart Jesse's secrets - which may mean anything from a key ingredient to a certain motion of the big kitchen spoon." Index.

Condition: Near fine in very good dust jacket (some overall minor edgewear to the dust jacket, but a tight and clean copy)