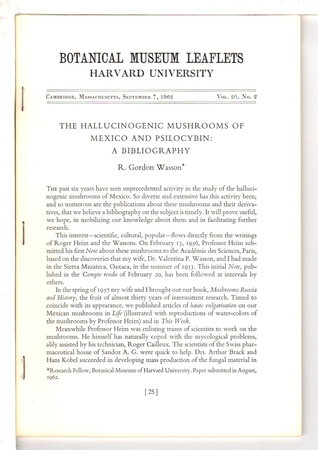 THE HALLUCINOGENIC MUSHROOMS OF MEXICO AND PSILOCYBIN: A BIBLIOGRAPHY: Botanical Museum Leaflets, September 7. 1962, Vol. 20, No. 2

Cambridge, MA: Botanical Musuem of Harvard University, 1962. First edition - Includes an introduction by R. Gordon Wasson and an extensive bibliography, beginning with a section of books and other publications by Wasson and Roger Heims.Wasson was an international banker, amateur mycologist, and author, who married Valentina Pavlovna Guercken, a pediatrician,Ê in 1926.Ê On a delayed honeymoon in 1927 in the Catskill Mountains of New York, the Wassons' lifelong gathering of "references to mushrooms and toadstools in the folklore of the world" began. The Wassons went on to integrate mycological data with data from other fields: history, linguistics, comparative religion, mythology, art, and archaeology, exploring all aspects of mushrooms. Their investigations led to expeditions in Mexico beginning in 1953 to research the magico-religious use of mushrooms. In 1955, they became the first outsiders to participate the Mazatec Indians' sacred mushroom rituals and more than anyone else he was responsible for bringing awareness of these hallugenic mushrooms to Americans in general with the publication of an article in Life Magazine in 1957 (although Wasson did not use the term, the Life Magazine article referred to them as "magic mushrooms" and that caught on.) Ê Many entries are annotated, in some cases with significant detail. pp, 25-73.