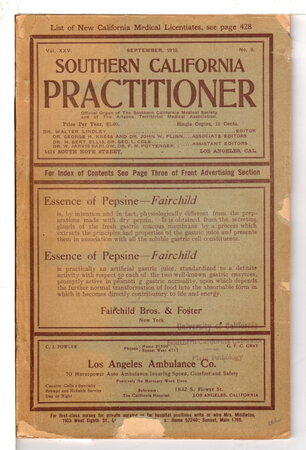 Los Angeles: Southern California Medical Society, 1910. First edition - A single issue of this magazine which described itself as "the official organ of the Southern California Medical Society and of the Arizona Territorial Medical Association. Although it was published for the medical community with several factual articles (on the nature and treatment of hysteria, the care of the ears of infants and children, and even a short report of skunk hydrophobia - rabies) as well as a list of new licentiates, perhaps the most fascinating part of this now more than a century old periodical is the advertisements. A full page ad under the heading "Going East This Year?" offers reduced fare excursions. A few - like Listerine - are for products still familiar to us, but most are for treatments long discarded. To cite just one example, this issue contains an ad for The Antikamnia Chemical Company. The message is simple "if there is pain, that's enough" but the history behind this company is fascinating. In 1910, when this issue came out, the company was embroiled in a lawsuit with the FDA because its painkiller contained a derivitive of acetinalid, which had been shown to be extremely dangerous and even fatal, and this was not disclosed - a case which went all the way to the Supreme Court. It was apparently an effective painkiller though, and 40 years later it was discovered that it metabolized to paracetamol (acetaminophen) - or Tylenol. Bound in printed tan wrappers. The actual content is on pp 402 to 444. preceded by 20 pages and followed by 14 pages of advertisements.

Condition: Fair condition only with significant chipping to the covers, but still flexible and easily readable.