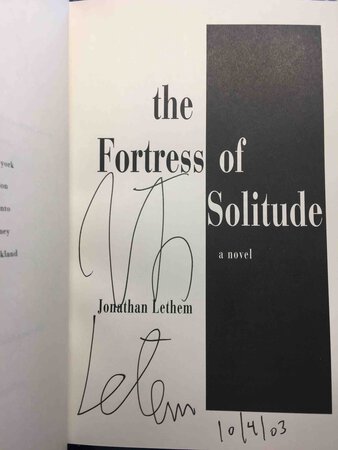 THE FORTRESS OF SOLITUDE.

New York: Doubleday, (2003.) dj. SIGNED hardcover - Selected as one of the best books of 2003 by the San Francisco Chronicle, which described it thus: 'This magnificent, ungainly, genre-cracking new novel by the author of "Motherless Brooklyn" is about all kinds of things -- about the past 40 years in America, about popular culture as a salve for the unpopular -- but maybe most of all, it's about how whites and blacks misunderstand each other. In exploring this, through the relationship of two teenage boys in a mixed Brooklyn neighborhood, Lethem winds up confronting race in America with a specificity most white novelists since Mark Twain have been too chicken to try.' SIGNED on the title page and dated in the year of publication. ISBN: 0-385-500696.