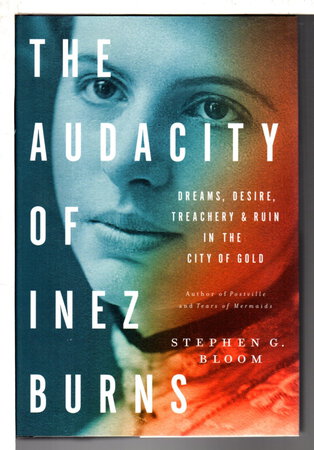 THE AUDACITY OF INEZ BURNS: Dreams, Desire, Treachery and Ruin in the City of Gold.

New York: Regan Arts, (2018) dj. SIGNED hardcover first edition - Based on years of research, this is an account of the life - and downfall - of Inez Burns, born in the slums of San Francisco who transformed herself into one of the richest women in the city - as an abortionist, credited with performing over 50,000 of the safest and most hygenic abortions available, for everyone from poor women already burdened with too many children to rich wives, Hollywood stars and others. Pat Brown (later governor and father of Jerry Brown) was determined to take her down - and eventually succeeded when she was 61 in having her convicted. She died in 1976, 3 years after Roe vs Wade revolutionized women's choices. SIGNED on the title page. Many photographs, endnotes. 428 pp. Illustrated endpapers. ISBN: 978-1682450093.