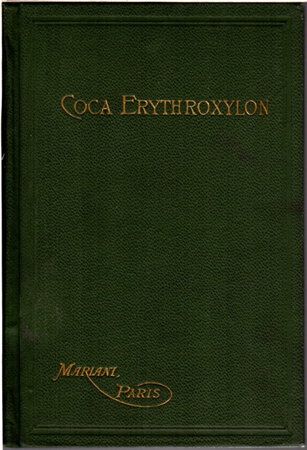 COCA ERYTHROXYLON: (Vin Mariani) Its Uses in the Treatment of Disease (Cocaine) with Notes and Comments by Prominent Physicians.

New York & Paris: Mariani & Co, 1886. Hardcover - Includes the history, chemistry, physiological effects, and therapeutical uses of this elixir, made from Peruvian Coca (Cocaine) leaves, which was originally translated from the French in 1864, but in this edition it is supplemented by many 1870s and 188's case studies and statements by doctors about the efficacy of coca. As noted in the preface, this book was available for free to doctors. Much of the focus is not just on coca, but specifically on the formula used in wine by Mariani, so it also includes a warning against pharmacists concocting their own coca preparations (which are bitter, cause negative side effects, and are less efficacious.) An interesting example of early promotion of a 'brand' name in the pharmaceutical industry as well as comments on what was seen by the medical establishment as a 'wonder drug.' Illustrated with one botanical plate. iii, 52 pp. plus a final full page advertisement which not only states that this is "well-adapted for children" but that it "sustains life for a long period and nourishes without any other food or drink."

Condition: Very good in pebbled dark green cloth with gold lettering on the front cover (some soiling to the margins of a few pages).