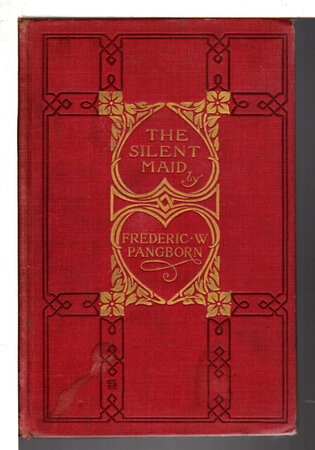 THE SILENT MAID: Being the Story of Stille Maegth, Her Strange Bewitchment and Her Wondrous Song.

Boston: L. C. Page & Company, 1903. Hardcover first edition - The author's rather uncommon fourth book, a story inspired by Germanic myths about a spirit who is allowed to take human form, but not to speak to those of woman born. When a powerful Baron encounters her as a child in the forest, he brings her back to his domain, and ten years later he marries her in defiance of an ancient curse on his family that forbade the love of a maiden, requiring that any taken to wife be a woman previously wedded. The maiden, however, loves one of his knights and although death follows this disloyalty, the curse is broken and his heirs will live in happiness and the maiden will be once again a spirit who sings in the forest. Frontispiece by Frank T. Merrill with tissue guard. 223 pp.

Condition: Good overall in the original decorated red cloth, with front and spine panels - some rubbing to the spine, corners slightly bumped and a blank mailing label has been pasted on the front endpaper.