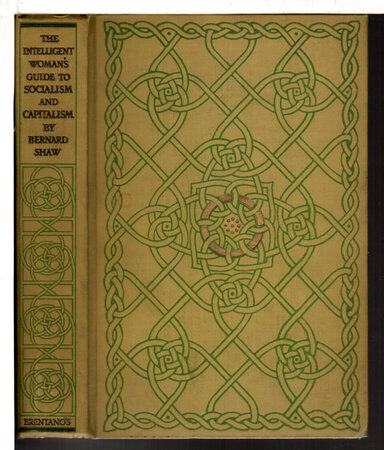 THE INTELLIGENT WOMAN'S GUIDE TO SOCIALISM AND CAPITALISM,

New York: Brentano's, 1928. Hardcover - A book written by George Bernard Shaw, the Irish dramatist, literary critic, ardent socialist, and winner of the Nobel prize in 1925, in response to his sister-in-law's request for a "few ideas on socialism." Includes a foreword for American readers. Index. xlvi, 495 pp. Laid in is a card with notes presumably from the previous owner who objected to this early example of "mansplaining" ("Both give me a fit, so I yearn to just stir up a fuss, he presumes he's quite qualified to act as a guide to intelligent women. . .")

Condition: Very good in pale yellow cloth with green interlocking Celtic knots - toning to the spine, some wear to the covers, previous owner's name on front pastedown, no dust jacket.