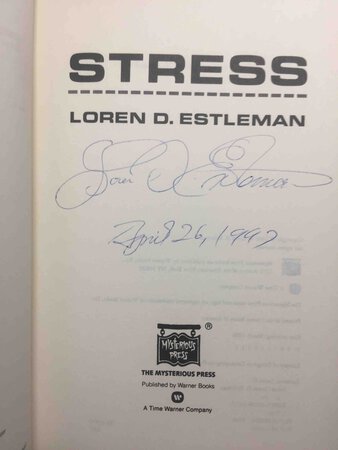 New York: Mysterious Press, (1996) dj. SIGNED hardcover first edition - The fifth novel in his Detroit series, set in Motown in the early 1970s when it has earned the reputation of the Murder Capitol of America - a city where a police crackdown squad (STRESS) had been formed, but the result was more dead young Black men, and a Black community outraged and aggrieved. Although set 50 years ago, the problems this deals with are still occuring today. In his afterword Estleman notes that one of Coleman Young's - the city's first Black mayor - first acts was to disband STRESS and the following year the murder rate declined for the first time in 13 years. SIGNED and dated on the title page. ISBN: 0-892965533.