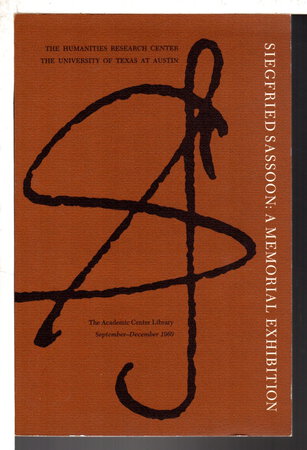 Austin, TX: Humanities Research Center / The University of Texas at Austin, 1969. First edition - Catalogue for an exhibition at the Academic Center Library at the University of Texas, September - December, 1969. Two years after his death, this exhibition was designed to honor Sassoon as a poet and as a man. Complied by David Farmer, introduction by fellow war poet and close friend, Edmund Blunden. Illustrated with black and white photos. Issued in an edition of 2100 copies (although not stated, 2000 copies were in wrappers, 100 in boards), designed by David Price. Index. 68 pp plus colophon.