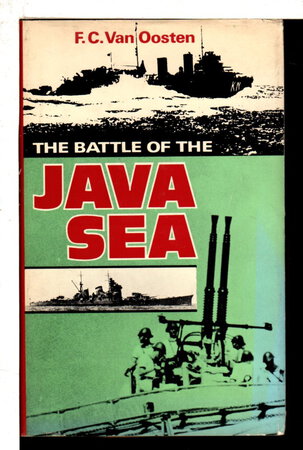 THE BATTLE OF THE JAVA SEA: The Sea Battles in Close-up Series.

Annapolis, Maryland: Naval Institute Press, (1976) dj. Hardcover first edition - This battle "was a fight against desperate odds, marking the end of the gallant struggle of a desperately depleted Allied fleet - American, British and Dutch - to keep the Japanese out of the Dutch East Indies in 1942. . . a combined command was set up by the Allies, but they failed to contain the Japanese advance and towards the end of February 1942 Java lay open to the Japanese." An account "compiled mainly from official Dutch reports and papers and reference has been made to Japanese, American and British papers." Illustrated with maps and photographs. Includes 17 appendices, bibliography, index. Small format (4 1/2 inches by 7 inches). 128 pp. Rear flap of dust jacket lists 12 other titles in this series. ISBN: 0-870219111.

Condition: Fine in black cloth in a very near fine dust jacket.