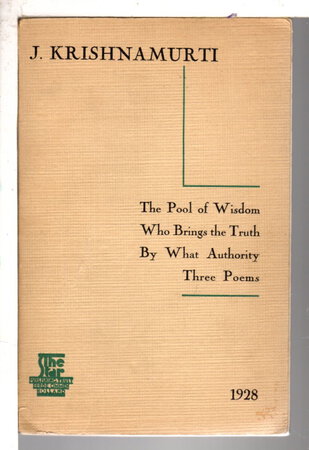 THE POOL OF WISDOM, WHO BRINGS THE TRUTH, BY WHAT AUTHORITY, THREE POEMS and Two Theosophy Brochures (3 items)

Eerde Ommen Holland: Star Publishing Trust, 1928. First edition - Talks given by this Indian philosopher, speaker and writer in the Netherlands in 1926 and 1927 plus three poems. Laid in are two uncommon small undated Theosophy brochures - Books on Theosopy by L. W. Rogers (single sheet folded to create 4 pp) and The Advantages of Theosophy by C. W. Leadbeater (2 sheets stapled and folded to create 8 pp) In his early life Krishnamurti, who was discovered by Leadbeater as a boy in India, was groomed to be the new World Teacher but later rejected this mantle and withdrew from the Theosophy organization behind it. Frontispiece portrait. 100 pp.

Condition: Very good in cream soft card covers, black lettering on front and spine, green cartouche on front (some toning to the covers, small tear at base of spine) Brochures are fine.