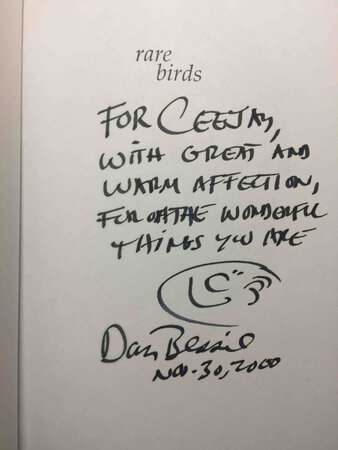 Lexington, KY: The University Press Of Kentucky, (2001). SIGNED hardcover first edition - "What does a writer do when he's got a family that includes a blacklisted member of the Hollywood Ten, the brains behind Tony the Tiger and the Marlboro Man, a trio of gay puppeteers, the world's leading birdwatcher, sixties hippies, a Dutch stowaway who served in an all-black regiment during the American Civil War, a mother of unusual compassion and understanding, and a convicted murderer? He tells their stories and secrets, illuminating 150 years of American life along the way. Dan Bessie begins the journey through his family history with his great-grandfather in the cargo hold of a ship bound for New York on the storm-tossed Atlantic." An account of his family by this screenwriter and the son of blacklisted writer Alvah Bessie. Warmly INSCRIBED on half title page and dated November 30, 2000. xv, 287 pp. ISBN: 0-813121795.