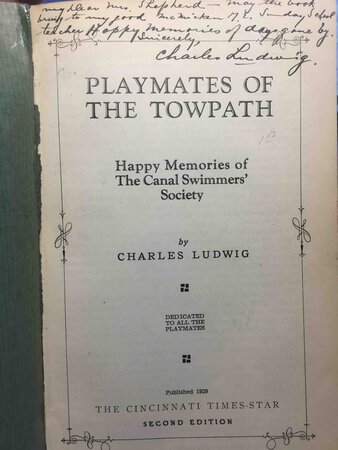 PLAYMATES OF THE TOWPATH: Happy Memories of the Canal Swimmers' Society.

Cincinnati: Ohio: Cincinnati Times-Star, 1929. SIGNED - In historic downtown Cincinnati, Central Parkway is a landmark avenue, noted for its width. "But under the parkway was once the Miami & Erie Canal, which connected Lake Erie with the Ohio River. Completed in 1845, the canal was a vital means of transportation of goods through the state. Railroads put the canal out of business, but it remained a waterway through Cincinnati well into the twentieth century. As Cincinnati burgeoned into a modern urban metropolis, the canal became a playing ground for the city's daring youth and adults." A book compiled by Charles Ludwig, a Cincinnati Times-Star reporter and a canal swimmer himself,upon the end of the Canal, one which gathers together stories and vignettes celebrating the canal's recreational past. A presentation copy warmly INSCRIBED by the author on the title page. Illustrated with many vintage photographs, reproductions of newspaper clippings. 160 pp.

Condition: Fair condition only in illustrated green wrappers (rather significant biopredation and chipping to the edges of the textblock - only affecting the margins, so the book is still very readable) Uncommon in the original edition and especially so signed.