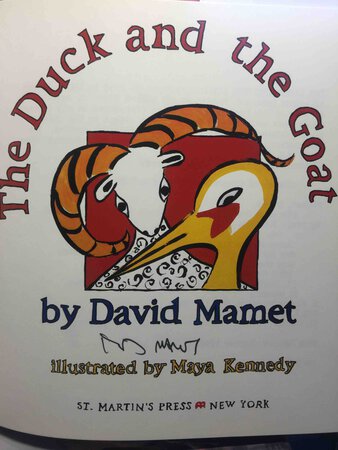 THE DUCK AND THE GOAT.

New York: St Martin's, (1996). SIGNED hardcover first edition - "Come and sail the seas and join the adventures of an Angora Goat and a Muscovy Duck." Charming children's book by this Pulitzer prize winning playright, written in catchy rhymes which tell the story of the journey of "an angora goat and a muscovy duck who rode to work in a fire truck, but the press of traffic and the laws of luck, rendered them late for work." Four-color illustrations, including several double page spreads, by Maya Kennedy. SIGNED on the title page by the author, David Mamet. Square format, unpaginated. ISBN: 0-312148178.