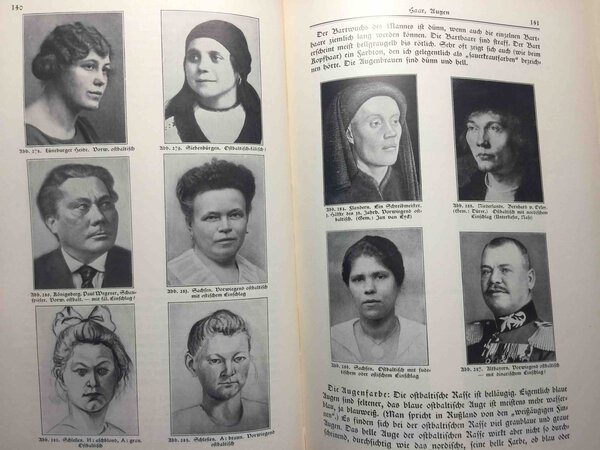 Munchen: J. S. Lehmanns Verlag 1930. Hardcover - An early (14th auslage) edition of this book originally published in 1922, one which strongly influenced the racial policy of the Nazi Party. According to Wikipedia, Adolf Hitler was so impressed by the work, that he made it the basis of his eugenics policy. The book had gone through six editions by 1926, and by 1945, more than half a million copies had been sold in Germany. Gunther describes the Germans as being composed of five racial subtypes: Nordic, Mediterranean, Alpine, East Baltic, and Dinaric, viewing Nordics as being at the top of the racial hierarchy. In addition to their physical appearance each racial subtype was defined according to their psychological qualities. Illustrated with hundreds photographs of Germans identified according to their subtypes, of skulls and with maps. Gunther joined the Nazi Party in 1932, the only leading racial theorist to do so before it assumed power in 1933. After Hitler's death, his library was found to contain four different editions of this book. Text in GERMAN. Index, 509 pp. plus advertisements.