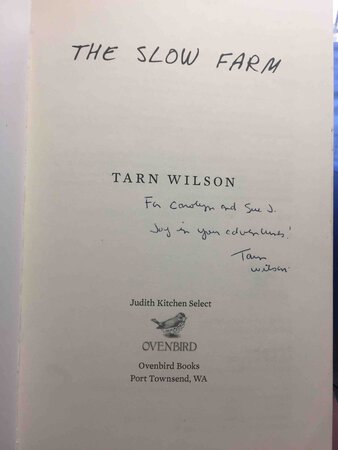 Port Townsend, WA: Ovenbird Books, (2014). SIGNED first edition - The author's account of her early years on a Gulf island north of Vancouver in British Columbia - an attempt to look back and understand them, and also an account of revisiting this island - reconnecting with her father. "In the early 1970s, Tarn Wilson's father quit his job as the Brookings Institution's first computer programmer, packed his family into a converted school bus with 'Suck Nixon' painted on the side, and headed for the Canadian wilderness. He planned to give his two young children an Edenic childhood, free from the shadows of war, materialism, and middle class repression. Between each lyric chapter, told from the child's point of view, Wilson incorporates 'artifacts' that reveal larger cultural forces shaping her parents' decisions: letters, photographs, timelines, newspaper clippings, excepts from radical approaches to child rearing." INSCRIBED on the title page. Foreword by Judith Kitchen. Photographs. 367 pp. ISBN: 978-1940906065.

Condition: Very good in illustrated wrappers (some curling to the edges of the covers) .