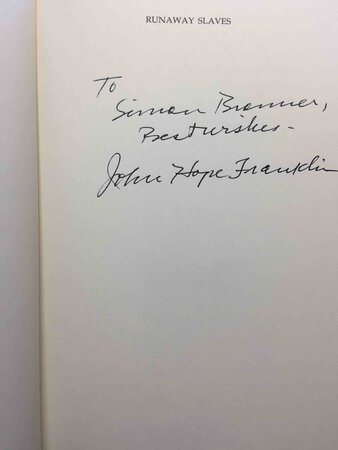 RUNAWAY SLAVES: Rebels on the Plantation.

New York: Oxford University Press, 1999. dj. SIGNED hardcover first edition - A definitive analysis of slave resistance and escape, one which shows that, contrary to popular belief, slaves frequently rebelled against their masters and ran away from their plantations whenever they could. Based on original documents including "planters' records, petitions to county courts and state legislatures, and local newspapers, this book shows how slaves resisted, when, where, and how they escaped, where they fled to, how long they remained in hiding, and how they survived away from the plantation. Of equal importance, it examines the reactions of the white slaveholding class, revealing how they marshaled considerable effort to prevent runaways, meted out severe punishments, and established patrols to hunt down escaped slaves." INSCRIBED by Franklin on the half title page. Illustrated, charts, extensive notes, bibliography, index. xvii, 455 pp. ISBN: 0-195084497.