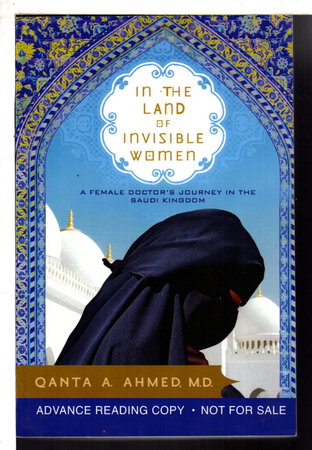 IN THE LAND OF INVISIBLE WOMEN: A Female Doctor's Journey in the Saudi Kingdom

Naperville, IL: Sourcebooks, (2008). First edition - When she was denied a visa to remain in the United States, Qanta Ahmed, a young British Muslim doctor, accepted a position in Saudi Arabia. She saw this as more than a new job, but also a chance at adventure in an exotic land she thinks she understands, a place she hopes she will belong. Instead she discovers that The Kingdom is a world apart - she finds rejection and scorn in the places she believed would most embrace her, but also humor, honesty, loyalty and love - and she finds a life-changing pilgrimage back to her Muslim faith. Endnotes. ix, 444 pp plus a reading group guide.