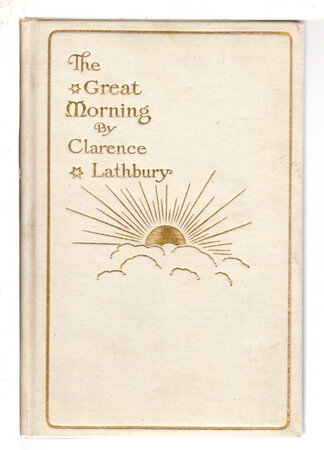 Minneapolis: The Nunc Licet Press, 1911. Hardcover first edition - A rather hard to find title by this prolific religious writer, a collection of three essays on death and life after death. Lathbury was originally ordained as a minister in the Methodist Episcopal Church but moved to the Swedenborgian influenced New Church in 1892. Frontispiece illustration of angels, with a tissue guard, facing a hymn entitled "Aspiration" by Mary A. Lathbury, the author's sister. The name of the press - "Nunc Licet" - is a Latin phrase which means "Now it is allowed." Swedenborg adopted this inscription as a way of expressing the idea that now people are allowed to use their intellects to explore issues of faith in Scripture that were, for various reasons, formerly shrouded in mystery. A small volume, 71 pp.

Condition: Fine in white cloth with gilt lettering and illustration on front cover.